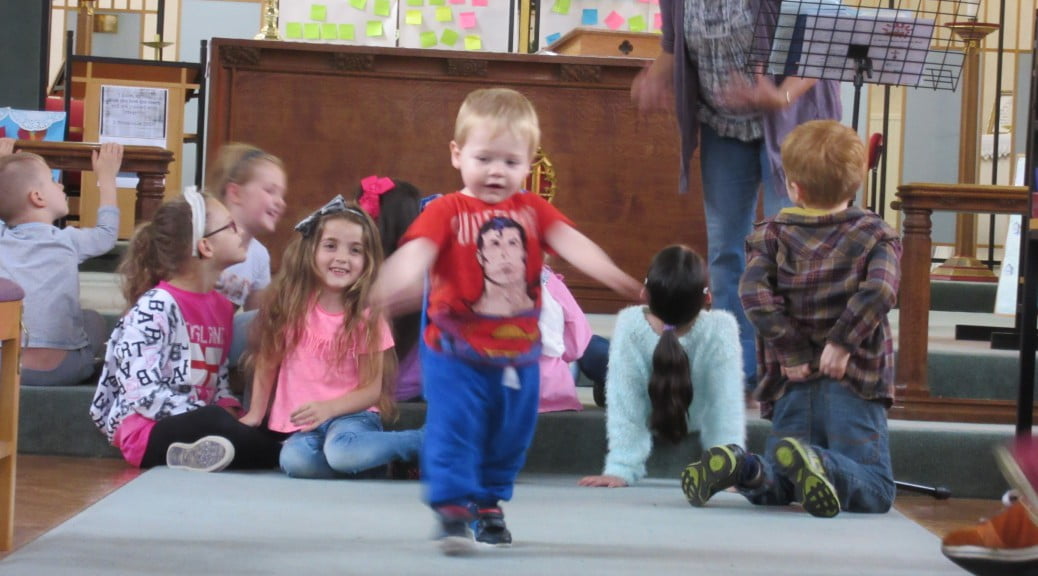 We are in the process of reflection and prayer in discerning if this is the right time for St Mary’s to admit children to communion prior to being Confirmed.  Below is the first sermon in a series of sermons throughout January that explores this.

May I speak in the name of the Father, the Son and the Holy Spirit. Amen

One of the biggest objections to admitting Children to Communion, is ‘they don’t understand what they are doing.’ Well, who of us fully understands what is going on during communion? If you talk honestly to each other about what you believe is happening during communion I guarantee you will get several understandings and meanings of what is happening, all of which will be equally valid. The Eucharist in itself comes from the Greek meaning mystery!

That’s not to dismiss the importance of the sacrament of holy communion, children, like adults need to be taught, and shown what it means, and like adults need their spiritual lives developed and enriched. And so I’m hoping that over these next few weeks, we will all be challenged to come to a richer understanding and possibly a new understanding of the sacrament. Hopefully it will bring the sacrament into a deeper richer experience for us all as we look at what we do and why we do it.

At the Last Supper Jesus shared a meal with His disciples and then led them in the ancient observance of the Passover. Jesus, the Master Teacher, used this opportunity to plant an important memory in His disciples gathered in that upper room. Jesus shared this meal for their benefit and for ours. As he raised the bread and the cup in thanksgiving, He added new significance to this ancient ritual. Jesus told His disciples to observe the Passover “in remembrance of me.”

He took an old symbol and filled it with new meaning. The meaning of his words and actions rooted in His command to remember. As today’s disciples, we observe the Lord’s Supper, otherwise known as Holy Communion or the Eucharist, in remembrance of Christ, to highlight the significance of Christ’s atoning work on the cross and to call believers to remember His sacrificial death, and to enter into that intimacy with Christ.

The Passover feast is the historical background for the Lord’s Supper. Exodus 12 presents the final chapter in God’s miraculous rescue of Israel from slavery in Egypt: the plague of judgement of the firstborn. For the angel of death to pass over a household, a family had to put blood from a sacrificed lamb on the door frame of their house and eat the Passover meal as the Lord had prescribed. This lamb and the meal of unleavened bread became the abiding symbol of Israel’s deliverance from bondage.

As Jesus’ disciples watched him and listened to His words this Passover, they would have understood the historical significance of His actions. What they did not fully understand until after the crucifixion and resurrection, however, was the transformation of what had been a Jewish feast of remembrance into a new symbol for remembering Jesus’ atoning sacrifice. The God who acted in history to deliver His people Israel has also acted in history to deliver us.

One thing to say at this point; today is not the day to discuss whether or not the elements used in a Communion service turn into the real body and blood of Jesus, but regardless of that, they are powerful symbols that cause us to remember that Jesus really did suffer and die in a real, historical time and place, and that during this time of remembrance, somehow we encounter the real presence of Jesus in a far more powerful way than at any other time. What Jesus did centuries ago impacts our life today and our eternity as well.

We should remember the Supper’s redemptive significance. When John the Baptist saw Jesus approaching, he cried out, “Look, the Lamb of God, who takes away the sin of the world!” (John 1:29). John clearly established the reason for Jesus’ coming: as the fulfilment of what the Passover lamb had only foreshadowed. In Exodus 12, the lamb was sacrificed for the deliverance of one family; at the cross, the Lamb of God was sacrificed to deliver the whole world from the power and penalty of sin. The Passover lamb served as the substitute for the firstborn of Israel, but Jesus was our substitute at Calvary. Without the death of the lamb and the spreading of its blood, the children of Israel would have suffered the judgement of God. Without the shedding of the blood of Jesus and His substitutionary death, we would have no hope of salvation.

People have many ideas about who Jesus is and why He came to earth. Jesus said Himself that He “came to seek and to save what was lost” (Luke 19:10). When we gather around the Lord’s table, the elements speak to us of His sacrifice, His substitution, and our salvation. We celebrate our redemption in remembrance of Him.

We should remember the Supper’s personal significance. Luke 22:19-20 record Jesus’ words: “This is my body given for you. . . . This cup is the new covenant in my blood, which is poured out for you.” In doing this Jesus drew the meaning of the whole meal on to himself. He offered a new direction of thought which, for those who followed him and came to believe in him, took Passover in quite a new direction, which has continued to this day. We can perhaps imagine the shock of the disciples as they realised he was departing from the normal script and talk about……himself.

Look around the room in your mind’s eye and see the reaction of the disciples. Peter, he is furious that Jesus is still talking about dying, and on such a special evening too. Thomas, giving a little shake of the head. He’d not understood more than a third of what had gone on before, and he doesn’t understand this at all. John, looking up in astonishment, in a mixture of love and fear. Judas, frozen in his place, wondering how much Jesus knows and how much he’s guessed. And you? What is your reaction to this extraordinary performance?

For many Christians, the regular celebration in which we copy Jesus, remembering that Last Supper and repeating it’s action in order to go back in heart and mind to the original setting, and nourish ourselves once more with the death and life and presence and personality of Jesus – for many of us, this is a central part of our story. We wouldn’t do without it. But for others it has remained a puzzle, a bit threatening perhaps. It’s been so overlaid with different meanings, and seems to have caused so many squabbles, that people are almost shy about it.

The heart of the matter is reasonably straight forward, Jesus was drawing into one event a millennium and more Jewish celebrations. Jesus was saying, by what he was doing as much as by the words he was speaking: this is the moment. This is the time. And it’s all because of what is going to happen to me. All Jewish history would culminate in the death and resurrection of Jesus Christ. His actions at the Last Supper had power beyond words. A power to touch and heal parts of our broken and messy lives. A power to tell the world that Jesus is Lord of all creation and of all peoples.

In a moment, I will stand behind that table and after having said the Eucharistic prayers which tell this story, our story, I will say that all who are baptised and no and love the Lord are welcome. But of course, that isn’t true, is it? It has the proviso, but only if you have been confirmed or are over 18, or already receive communion.

Which is why we are exploring the question; should we continue to withhold this sacrament, our Lords supper, to our children?

Rooted in prayer, growing in Christ, sowing the seeds of His love.